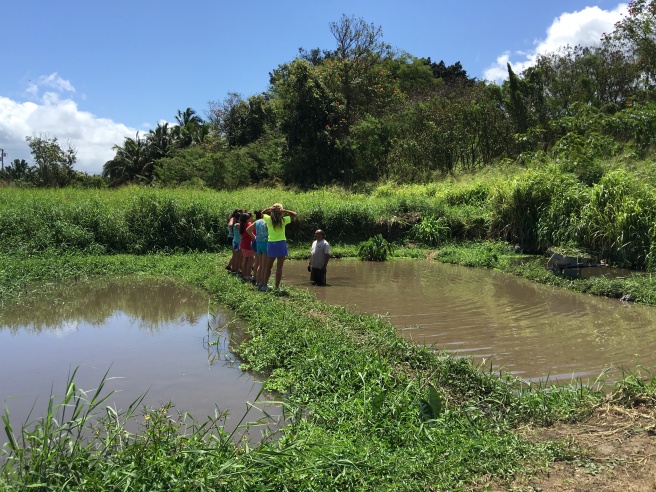 On a cool, breezy day, under the beautiful blue Hale’iwa sky, the 4th grade class of my son’s elementary school presented an ‘oli (chant) to humbly request Aunty Nona, Kumu Mokihana, Aunty Lisa, as well as, spiritual ancestors to share knowledge with them. 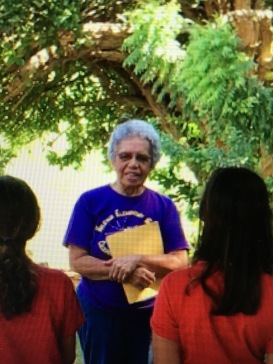 Winona Pihana-Chaney, 83, also known as, Aunty Nona – is the daughter of the late Mary K. Kelii Pihana who was the Hawaiian Studies kupuna at Wahiawa Elementary School. Since 1993, Aunty Nona has continued the work of her mother by bringing children to her taro farm where they learn, through hands-on activities, about kuleana – responsibility, and to mãlama ‘āina – protect the land, all while getting dirty, eating ono taro and crafting with lauhala.

The children are immediately put into three rotating groups. Our group’s first activity was to make a lauhala bracelet. As the chaperone, I helped pass out bracelets that were already started and ready to be woven while Aunty Nona instructed them on a simple checkerboard weave pattern. I too was given a bracelet to weave and Aunty Nona began to talk story, “You know, I was an accountant and I hated arts and crafts.” Having worked in accounting for 10 years myself, we immediately hit it off. She continued to tell me how she started educating student at her farm, “One day a principal came to me and said, ‘I want to bring my students to your farm,’ and I said, ‘Reeeaaaally?!’ I was surprised.” Soon, it became a place of learning and fun for many children that would come from all over the island. Aunty Nona praises Governor George Ariyoshi for prioritizing Hawaiian Studies education. She returned her attention to the children, “Oh, you have to redo yours, make the weave tighter,” and “Oh, you get an A+,” she said as she walked around guiding them on getting a perfect tight weave on their lauhala bracelets. 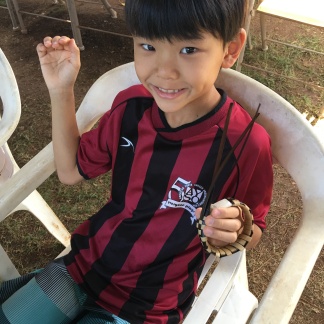 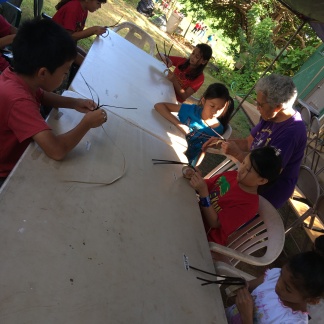 After their bracelets were completed and labeled with their names on strips of masking tape, we moved our group to Aunty Lisa’s outdoor kitchen. Aunty Lisa is the daughter-in-law of Aunty Nona. She taught us about taro and demonstrated the mashing of taro to make pa’i ‘ai. Aunty Lisa’s poi pounder is about 80 years old – made by her husband’s grandfather. Pounders required a lot of labor back then. They were formed by pounding two other stones to shape it, and smoothing the surface with sand. We all became hungry while she told us all the different dishes made from taro that she makes like mashed taro with butter and garlic, and fresh mango pa’i ‘ai bread! Mmmmm! It was almost lunch time too! 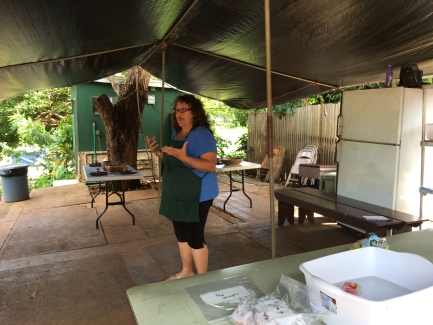 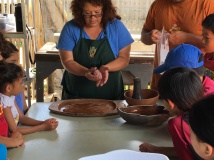 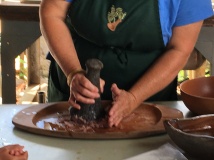 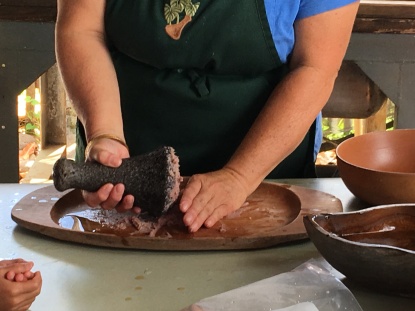 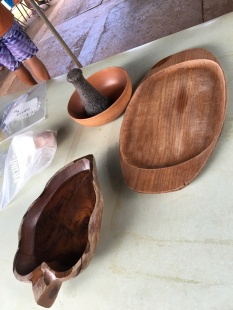 Keeping the taro in the middle of the board was a little challenging for my son! After mashing and bagging their taro to take with them, students got to taste some of what they made. They were responsible for cleaning up and setting up for the next group to participate.

Next, we moved down to the taro patch and Kumu Mokihana – Aunty Nona’s son and Aunty Lisa’s husband – taught us how to play ‘ulu maika (a hawaiian game where you role a disc between to sticks several feet away). 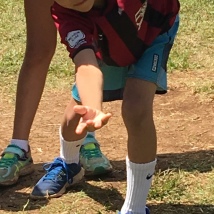 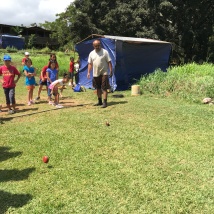 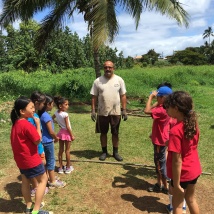 Lastly, it was time to jump get dirty and jump into the lo’i. Kumu Mokihana taught us how taro is sturdy enough to survive floods and droughts. In 2008 there was a big flood, many farms in Waialua lost their crops but the kalo (taro plant) survived. Having the children play in the lo’i is helpful in tilling the soil between harvests. It is good to move the nutrients around before planting the next crop. I had my sneakers on in the lo’i, moving slowly, pulling my shoes out of the mud with each step. Everything was squishy, squishy, squishy. The color of the mud is rich like dark chocolate and feels smooth in the hands like soft serve ice cream. As I watched my child swim and play in the mud, I thought a little about my anticipated laundry situation. 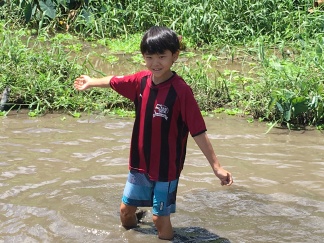 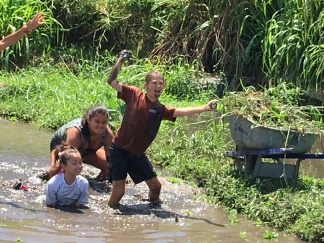 As we rode back on the bus, I thought of the precious ‘āina as our beautiful playground that provides us with everything we need to sustain life – air, food, and water. It’s important to give back and take care of our land because it takes care of us. Aunty Nona and her ohana opens their hearts and their homes to provide a truly fun and meaningful experience for all. 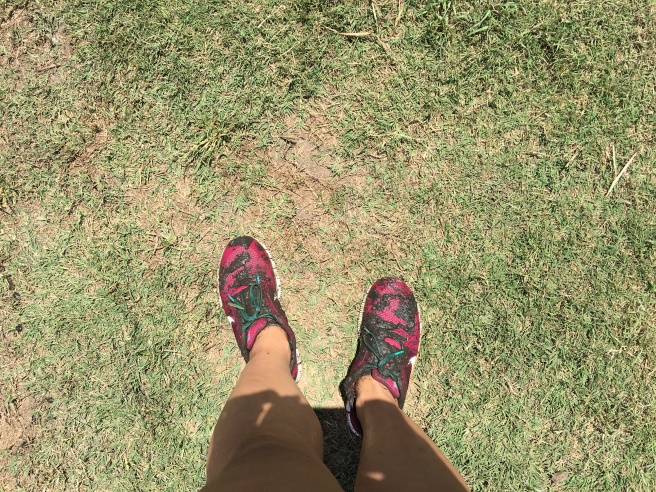